The defining characteristic of a traumatic event is its capacity to cause fear, helplessness, or horror as a response to the threat of injury or death, and therefore can affect anyone. Some examples of traumatic events include (please note this list is NOT exhaustive and we are adding content to this website all the time):

PTSD is essentially a memory filing error caused by a traumatic event. When you experience something really traumatic your body suspends ‘normal operations’ and so temporarily shuts down some bodily functions such as digestion, skin repair and crucially, memory processing. 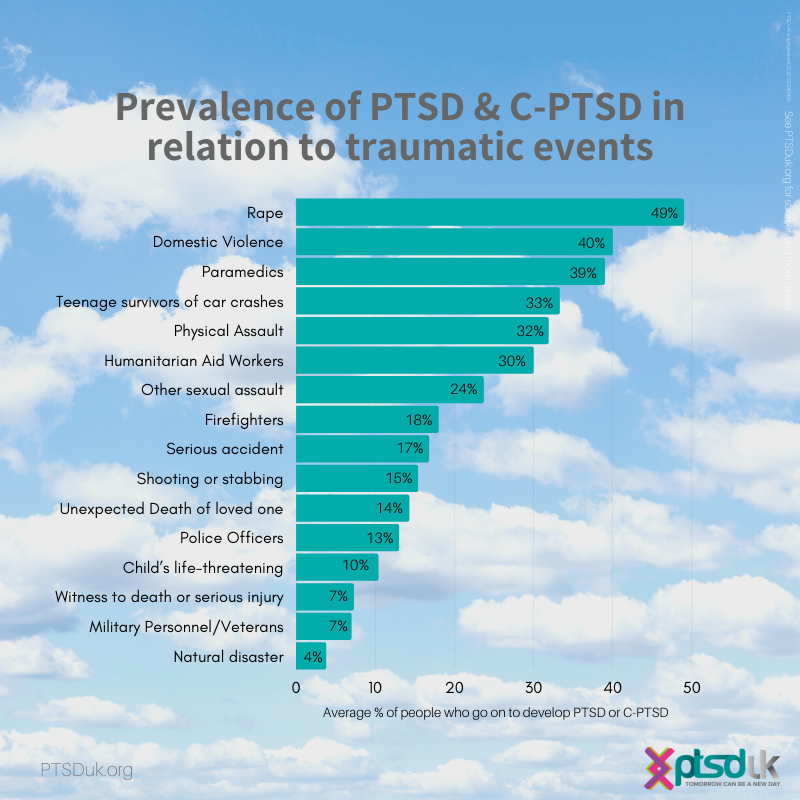 As such, until the danger passes, the mind does not produce a memory for this traumatic event in the normal way. So, when your brain eventually does go back to try to process the trauma, and the mind presents the situation as a memory for filing, if finds it ‘does not exist’ in your memory yet, so it sees it as a situation in the current timeline, and so it can be very distressing.

The distress comes from the fact that the brain is unable to recognise this as a ‘memory’, because it hasn’t been processed as one. As such, the facts of what happened, the emotions associated with the trauma and the sensations touch, taste, sound, vision, movement, and smell can be presented by the mind in the form of flashbacks – as if they are happening right now. The distress during the traumatic event, and this continued distress is what causes that changes in the brain, and the subsequent symptoms of PTSD.

The prevalence of PTSD and C-PTSD as a result of certain traumas is something that continues to be monitored and researched, but current estimates show the following figures (please note this doesn’t include ALL causes of PTSD and is based on a wide variety of resources  – all linked in the sources section at the bottom of this page).

There is a second, subtype of PTSD, called Complex PTSD, or C-PTSD. This is usually a result of repeated, or sustained traumas, and presents in a similar way to PTSD, but with some additional symptoms too. Any of the causes noted above (and many others) can cause C-PTSD if they have been experienced repeatedly, or if someone has experience a number of different traumas.  You can find out more about C-PTSD specifically here.

Why do some people develop PTSD and other don’t?

As much as science and research has continued to grow in the area, it’s still not clear why some people develop PTSD, whilst others who’ve been in a similar situation don’t develop the condition. We do however, know that anyone can develop PTSD, but some people are at greater risk.

A ‘risk factor’ is something that increases your likelihood of getting a disease or condition. Risk factors for the development of PTSD following a trauma fall into three categories: pre-trauma, peri-trauma and post-trauma factors.

Additionally, although we are still behind in gender- and sex-sensitive research and reporting, it’s been found that women have a two to three times higher risk of developing PTSD compared to men: The lifetime prevalence of PTSD is about 10–12% in women and 5–6% in men.  Several factors are involved explaining this difference – psychosocial and biological explanations (e.g. oxytocin related). Women also appear to have a more sensitised hypothalamus–pituitary–axis than men, while men appear to have a sensitised physiological hyperarousal system (which all changes how the brain functions in relation to stress and fear responses).

‘Although there has been expansion of our understanding of PTSD during the last 30 years, numerous questions remain about the epidemiology and risk factors for development of PTSD. Basic questions about how common PTSD is remain unanswered. Most of the studies on the prevalence of PTSD have used general population or military veteran samples. The prevalence of PTSD among vulnerable groups, such as children and adolescents, elderly, ethnic minorities, refugees, and First Nations, Inuit, and Metis populations, has not been well established. Future work needs to address these important gaps.’