Military personnel deal with intense levels of pressure and the sort of harsh realities that many people can’t begin to imagine. This leaves them highly vulnerable to the debilitating impact of post-traumatic stress disorder (PTSD) and Complex PTSD (C-PTSD) and the symptoms it brings.

It is common to think of PTSD in terms of veterans who have lived through life-threatening situations, after serving in war zones and operating at the frontline. Soldiers returning from the second world war were described as being “shell shocked”. The stereotypical portrayal of this in films and television programmes would be someone suffering from breakdowns which are triggered by loud noises and threat of attack.

The sad fact is that this is not a full picture of what PTSD is, and how it affects armed forces veterans and serving personnel.

Trauma in all its guises

PTSD is sometimes triggered by a single traumatic incident. However, it can also come from a culmination of highly disturbing events. This is why anyone who has experienced a trauma or traumatic events can develop PTSD or C-PTSD.

PTSD in the military is often referred to as “combat stress”. It is often linked to individuals fearing for their life or seeing others killed and hurt in explosions. However, military personnel are often also called in to help during the worst human tragedies and the bleakest natural disasters. If you are a soldier digging bodies from the rubble, or retrieving the dead from flood waters, though your own safety is assured, you are dealing with a constant assault on your mental and emotional resilience. They also often deal with the victim’s family and friends, who have lost loved ones in horrific circumstances.

On a daily basis, the armed forces can be physically and mentally stretched by the sort of tasks that few people can face for even a few minutes. For some, the damage of this level of stress and distress is immeasurable.

Mental Health and the military

With this in mind, it is not surprising that PTSD and C-PTSD is common in serving personnel and those who have left the armed services. Statistics vary and many cases go unreported, but a report, published in the British Journal of Psychiatry, estimates the rate of PTSD among UK veterans of all conflicts to be 7.4%. The rate of PTSD among the public is 4%. Research has also shown that ‘former military personnel who deployed to Iraq and Afghanistan were more likely to report the symptoms of PTSD. For veterans who deployed the rate was 9.4%, compared with 5% among those who did not participate in the two conflicts’.

Other studies in the UK have explored the topic of the “mental health crisis in the military”. One piece of research involved 10,000 people currently in the armed forces. Of those surveyed, 4% reported probable PTSD, while 19.7% reported other common mental disorders. There were also 13% who admitted to alcohol misuse.

The taboos surrounding PTSD can leave some military personnel unable to speak out or unaware of how to get help, although recent statistics do show that more and more serving personnel are seeking help for their mental health issues (seen in the graph here). 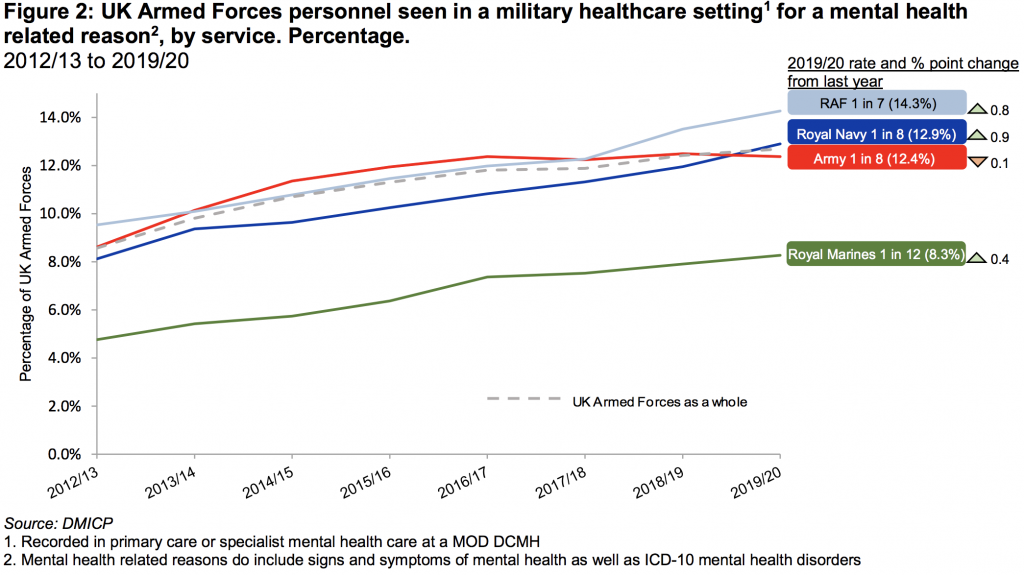 In the words of the NHS: “the culture of the armed forces can make seeking help for a mental health problem appear difficult.”

There is also a possibility that symptoms start to emerge some years after people leave their military career. Other veterans valiantly try to cope, concerned that they may be judged, or appear a “nuisance”.

Possibly this is compounded if the individual hasn’t served in combat positions. They feel “frauds” by admitting to recurrent nightmares, depression and seemingly erratic behaviour and moods, arising from what they have seen and done.

Tragically, some people take drastic action to end the misery of PTSD. According to one news report in 2018 there were 71 active and retired military personnel in the UK who took their own lives. How many more suicides go unreported and how many people struggle on a daily basis, due to what they have seen or done in the course of their career?

Managing military personnel exposure to trauma and disturbing situations is difficult. More work to support them immediately afterwards is imperative. Then, meaningful and specialist PTSD help for armed forces veterans should be comprehensive and readily available.

Where to get help

As a serving person or reservist, there are many people you can talk to, including:

They can talk to you about your mental health and help you get further support if you feel you need it. If you need them, your DMS GP may refer you to specialist mental health services. These services are all commissioned by the Ministry of Defence (MoD).

Additionally, PTSD UK is here to support everyone affected by PTSD, no matter the trauma that caused it, but there are also some Veteran Specific charities in the UK who can provide additional assistance such as: